Sometimes when you’re on vacation, you’re welcomed with rain rather than sunshine, no matter how many anti-rain dances you’ve performed. I’m not talking a few sprinkles here and there. I’m talking a borderline downpour for a majority of the day. Shocking when it comes to London, I know. We were able to escape the rain for most of the day by visiting the British Museum, Platform 9 3/4 (yes, that’s right and no, I’m not too old), the Churchill War Rooms and Fortnum and Mason. It cleared up just enough at night for us to walk around for a bit and discover one of the highlights from the trip: Carnaby Street. 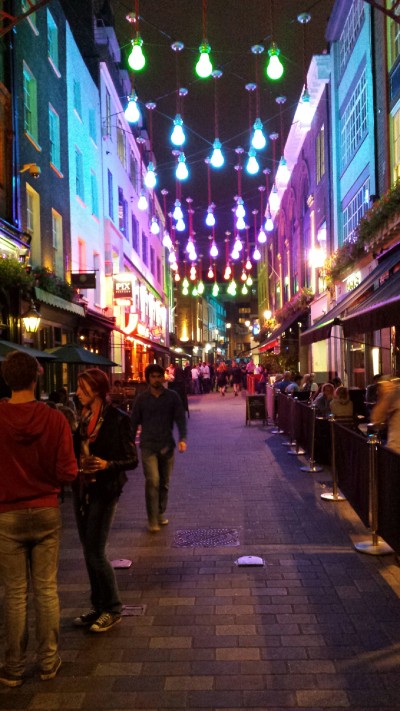 This pedestrian only shopping area is surrounded by pubs, restaurants, and plenty of locals. It’s located in the Soho district near Oxford and Regent Streets. Unfortunately, we got there after all of the stores had closed, but we were able to check out a couple of the pubs and bars. (And, rest assured, I was still able to shop.) We also stumbled upon Kingly Court, an adorable square of restaurants and shops, accessible from Carnaby Street.

After grabbing a drink at The Clachan, a pub built in 1898, and marveling at the details of the building (read: wondering why our bars and pubs don’t have as much character – and can you blame us?), we set off to explore more of the area. Though, it should be noted, we would’ve been happy hanging there for a few more hours.

Details at The Clachan

Blending in with the locals

We both agreed that we would visit again, and we held that promise. The following night, we made it to Central & Co for a drink and some people watching.

Finding Carnaby Street helped me to realize that some of the best parts of a vacation are the portions that are unplanned. They’re the parts that are stumbled upon completely by accident and they leave lasting impressions. That’s certainly the case with Carnaby Street.