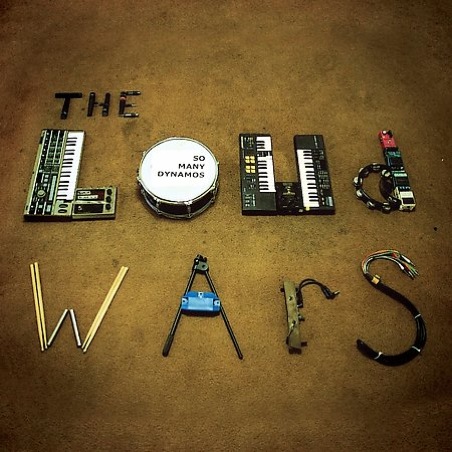 So Many Dynamos, a four piece band out of Edwardsville, Illinois, has been fusing together dance punk, indie pop, a bit of electronic sound and math rock for six years.

After popping in The Loud Wars, their second album (released on April 28th of this year), one thing came to mind.  They reminded me of a more upbeat, faster paced version of Death Cab for Cutie.

How so?  The matter-of-fact tone presented by Aaron Stoval, lead vocals, is extremely similar to Death Cab’s lead singer Ben Gibbard.  After reading a bit more about So Many Dynamos, I learned that The Loud Wars was produced by Chris Walla, guitarist for Death Cab and producer of all of their albums.  Perhaps that explains their uncanny similarity…

Although they do have a similar sound to the Washington band, So Many Dynamos also have an heir of originality about them.  “Oh, The Devastation!,” the sixth track on the CD, is a mixture of techno pop, indie pop and is driven by an ’80’s pop vibe.  (Interesting and totally random note: All of the lyrics to “Oh, The Devastation!” were written while members of So Many Dynamos were pacing around the baseball field located across the street from the band’s house in Edwardsville.)

The same sound can be heard in “Friendarmy,” a song about a different way of making aquaintances.

We don’t make friends, we don’t need them.

We killed our families and they will not be missed.

Regardless of the heavy lyrics, So Many Dynamos have a unique way of making intense subjects less…inense.  Sure, they discuss these topics in a few of their songs, but never once does it sound as though they are dragging their sneakers across some sort of angst ridden gravel.

To learn more about So Many Dynamos, head to their blog or their MySpace.

So Many Dynamos talk about “Loud Wars:”