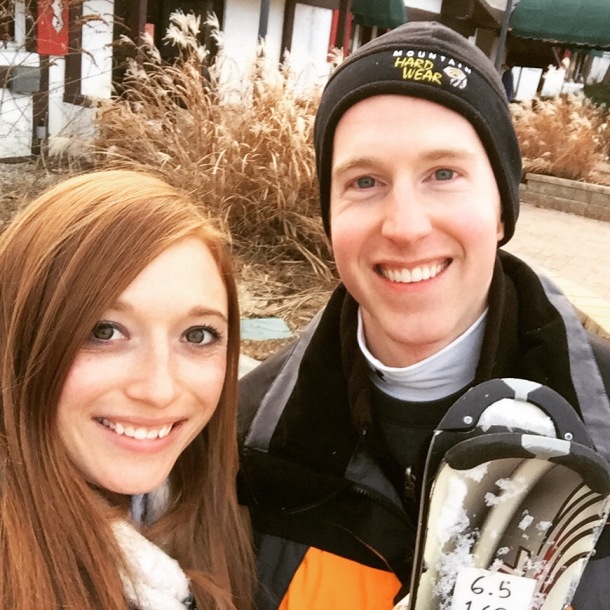 This is an after photo (ie: proof that there were survivors).

I skied! And, probably more impressive, I didn’t (fully) fall; and I survived! Believe me, I am just as shocked as you are.

I was less than enthusiastic at the suggestion of going skiing for the New Year holiday, but not so much due to the fear of throwing myself down a snowy Wisconsin hill, as fun as that sounds. It seemed like everyone but my roommate and I had been skiing on actual mountains (the horror), while we had watched the winter Olympics a few times. Let me tell you something. When it comes to skiing, one of these experiences is not as helpful as the other. Plus, what fun is throwing yourself-plus-one down a snowy Wisconsin hill alone? In 19 degree weather? Zero, I say.

So naturally, the Beginner Two packed up, banded together, and scheduled a lesson to take on the bunny hill. This was probably as much of a benefit to the other skiers at Alpine Valley as it was to the two of us.  There were both children and trees a-plenty, and we wanted to avoid running into both of them as much as possible.

We were gifted with an instructor named Patty who smelled our fear (that, or we informed her of it repeatedly – “Oh, you mean we have to actually put the skis on?”) and told us not to let the skis beat us. She told us that a lot, actually. We would beat the skis! Patty was right. We beat those skis. I won’t say we did it gracefully but we graduated from the bunny hill, got a little more used to the magic carpet, and even took what is quite possibly the scariest chairlift known to man. Twice!

Alright, I’ll admit it. It was fun and I’m glad I didn’t let the fear of looking uncoordinated or breaking my face keep me from learning to ski/learning something new, which, according to a Wall Street Journal article I read today, is never too late to do. I wouldn’t have complained if it was about 15 degrees warmer, though. Just saying.

On to February! Unless I stumble across a new thing to try, first. Open to (realistic) suggestions!