I’m not going to call myself a resolution failure for the month of March, but I’m willing to admit that I took the easy way out. Three months in and I already had to admit that to you. Allow me to explain.

For the past few months, I’ve been toying with the idea of signing up for ClassPass. It’s a membership that gets you access to fitness classes across the city of Chicago (and quite a few others). As someone who typically likes to work on my fitness in the privacy of my own home because, well, the privacy of my own home, I’d been hesitant. Plus, I like to avoid the fees I hear a lot of people complaining about. When ClassPass came out with a trial offer for $10 for a week of unlimited classes, I decided to take that as a sign to enroll. That and FOMO.

Here’s where this month’s new thing can be seen as cheating. Technically, any class but the spin or barre class I took in the past could be viewed as me trying something new. I’ve already accomplished a “new thing” in the past by trying a fitness class, so I’ve probably maxed out in that category. That’s why it may be cheating. 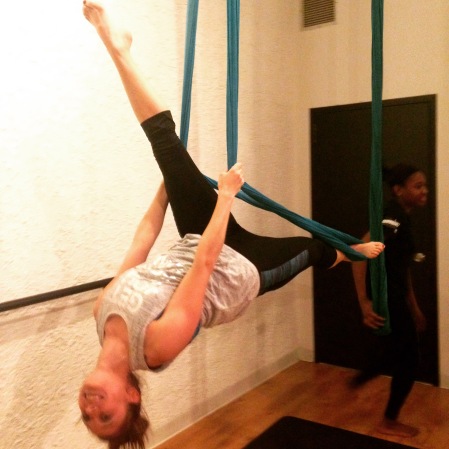 Yes, I decided to flip upside down and tangle myself in a silk hanging from the ceiling since that’s something I’ve never done before. In fact, aside from prancing around my family room in gradeschool with a ribbon dancer, I’ve never done anything remotely close to breaking a sweat from a piece of fabric. But I digress.

Somehow, I was able to convince not one but two friends of mine to join me on this endeavor. Now, I rarely say that I enjoy working out, but aerial yoga is something I could have fun doing. The physical and mental challenges were both there (as told by my inability to move the following day) and it felt like there was an artistic element to it. Certainly not in my technique, but it was definitely clear in the instructor’s movements.

I liked it so much that I went one more time during my seven day trial. That’s right – I willingly did this two times in one week!

I do promise to take a bigger risk in the month of April, though I’m sure if any of you gave aerial yoga a shot, you would understand why I’m counting it as a “new thing.”