By Tyler Deardorff, our new addition to Thoughts Out Loud/HauteThought 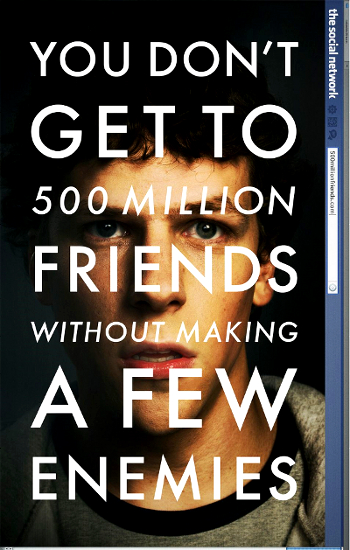 When everyone heard Hollywood was going to make a Facebook movie, I’m sure the thoughts that crossed your mind were: “Really?  That’s not necessary.”  When I saw The Social Network…wow.  There isn’t one thing wrong with it.  It isn’t too long, it isn’t boring and it isn’t badly acted.  Justin freaking Timberlake, you know…the guy from N’Sync, can act-and really well!  But this isn’t about him.  The lead actor, Jesse Eisenberg, knows how to be a huge smartass.  (You may remember him from Zombieland or Adventureland.)  Before this, Eisenberg had Michael Cera (Superbad, Juno, Scott Pilgrim vs. the World) syndrome.  They play the exact same person in every movie they’re in: the horny, talks fast and slick, NERD.  The Social Network totally changed my opinion of Eisenberg.

The Social Network switches between how Facebook was created and the court cases in which Jesse Eisenberg’s character, Mark Zuckerberg-the creator of Facebook, is being sued.  Whether it is an accurate portrayal or a greatly exaggerated one, it’s a fun ride and pretty interesting.  Armie Hammer plays the Winklevoss twins, who claim Zuckerberg stole the Facebook idea from them, with such an intensity that it will probably come up around the Oscars.  Hammer’s two characters were the best part of the movie.  He who brought sexy back a.k.a Justin Timberlake plays Sean Parker, the computer programmer who created Napster and wants a part of the rapidly growing Facebook business.  Let’s just say that when he joins the team…well, it all goes down the toilet.  I don’t want to say much more ’cause then I’ll spoil it.  Just go see it.  You’ll “like” it.

Also, pay attention to the writing and the music throughout the course of the movie.  You’ll like them, too.  Hahahaha like!  Ok, I’m done.

2 thoughts on ““The Social Network” Review”