Since my last review, I’ve come to accept that being old enough to choose to write a book review on my own isn’t a terrible, horrible thing.  It’s actually kind of fun since I can write in any font and size I deem worthy.  But not Comic Sans. Never Comic Sans. (As an aside, when did people decide they hated Comic Sans? A kid in my gradeschool always used Comic Sans and now he’s…oh. I suppose I get it now.)

I’m not a firm believer in peer pressure, but after reading The Happiness Project by Gretchen Rubin, I have decided it may be my duty in life to peer pressure anyone and everyone into reading this book.  Neither my mom nor my sister is a big reader, so instead of going on and on about the book, dropping not at all subtle hints with the hopes that they’d ever-so-kindly ask to borrow my copy, I headed to the mother ship (Amazon.com) and ordered and shipped it straight to them.  Both of them are smart, well-educated gals, but they just aren’t into reading – which is fine.  Except for my sister’s aversion is not fine. Her deal is that she has to be the one to decide to read a book, otherwise she won’t do it.  For example, knowing that she’d love the series, I tried to persuade her into reading The Hunger Games.  It took quite some time (you would have thought I was asking her to give me not only her movie collection, but also her first born) yet as soon as she started, she was hooked.  So much so that when we were on our family vacation, she had to find a book store and pick up the third book.  To my sister: you’re welcome.

To everyone else: it’s your turn to face my wrath.  I’d been meaning to pick up The Happiness Project for a couple of years now, but reading on the CTA in the city of Chicago is a bit more difficult now than it was to read on the commuter train when I lived in the burbs.  Life is hard; woe is me.

Realizing I could read – gasp! – in places other than the train, I gave myself a challenge to get back into reading but to do so with a goal: for every two fiction books I read, I must read one non-fiction.  (I learned pretty quickly into The Happiness Project that Rubin sets similar goals for herself. Like minded redheads, I suppose.)

The book is an entertaining, quick read about gaining control of your own happiness. No, it’s not a self-help book or one that has you confessing all of your perceived flaws over a bottle (or two) of wine. Rubin took the time to research various ways people have found happiness in the past, and she went ahead and gave them a try.  Did everything work for her? Absolutely not, and that’s what was refreshing. She got frustrated with her project at times because, well, she’s a human and not a smiley-faced bobble head.  For that I am grateful.  Why? Because I, too, am human and not a smiley-faced bobble head.  Here’s proof. While on vacation in sunny Punta Cana (this is not me bragging; this is something you need to know), I decided to try out what I had learned in chapter 11 and “keep a contented heart.” I’m aware that I can ruin my own happiness by focusing on the negative, and I can be easily influenced by those around me, in that respect. Simply put: I can easily get riled up. Well something, nothing major (according to me), happened on vacation that turned my boyfriend into what can only be described as a Negative Nancy.  So, I put on my very own Happiness Project front and did what I could to point out the positive because one of Rubin’s commandments is “act the way I want to feel.” I didn’t want to feel negative. So I went for it. We’re in Punta Cana! It’s so nice out! We can afford to take trips like this! Isn’t this restaurant the best one we’ve been to so far? Aren’t you so happy we’re here? ALERT! ALERT! I CHOSE THE WRONG TIME TO TEST THIS CHAPTER/THEORY/COMMANDMENT/OVERTLY HAPPY THOUGHTS OUT. I’d go into detail, but it’s still a small point of contention.  It lasted a couple of hours and all was well after that.  It seems I had forgotten what I had learned in chapter 4 (“acknowledge the reality of people’s feelings”) and just went ahead and jumped on it. Needless to say, I made an immediate mental note and realized I need to be better with the timing of trying out my very own newly learned tricks. 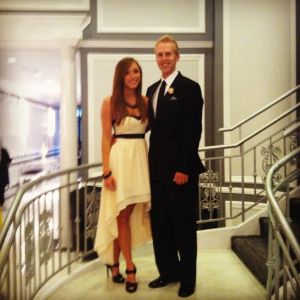 See? All is well now.

Rubin’s book has inspired me to clean out my closet, a task I have been avoiding for at least two years, to start looking into ways I can break out of a routine and revisit past hobbies, and quite a bit more – all in less than 300 pages.

Because it’s harder for me to peer pressure you over the Internet (unless we are Gchat buddies or real life buddies, in which case watch out), I’ll take a softer approach and make it easy for you to purchase the book here. Happy reading!